When the news of Fr. Talbot’s death spread among the parishioners of Bishop Thornton, no doubt his former congregation regretted the loss of so familiar a priest. At the same time perhaps they felt the moment had come to welcome a new pastor, a man of their own generation. He would, they might feel, be the person to lead them into a new and exciting age, one in which they might enjoy the first taste of real freedom and the opportunity to be openly and unapologetically Catholic.

The new pastor of St. Joseph’s mission was a Lancashire man, James Platt. Born in Warrington in 1785 he completed his studies for the priesthood at the newly-opened Ushaw College and was ordained in 1810. The Platts were clearly one of those Lancashire families with a tradition of service in the priesthood. His brother, Ralph, also became a priest and their uncle, another Ralph, spent most of his priesthood as chaplain to a gentry family in Cheshire. As well as a brother and an uncle in the priesthood James had a nephew, also called Ralph, who became a distinguished member of the later Diocese of Hallam.

James Platt, who was to become one of the first canons of the Beverley Diocese, from which the Leeds Diocese was later formed, inherited a missionary area of daunting size. To the west of Bishop Thornton he was responsible for the whole of the Nidderdale valley up to Pateley Bridge and beyond. To the east his responsibilities included the town of Ripon and all the villages between there and Bishop Thornton. A much later source estimated the mission of this period at bout 180 square miles in extent.

We have little detailed information regarding life in St. Joseph’s mission during Platt’s time there. In a report to the Bishop in 1843/1844 Platt states there were 399 people in his congregation and one presumes this figure includes all known Catholics in the area. In a later return of 1847 Platt reports that there were forty children in St. Joseph’s mission. The parish registers are a more informative source for this period. Numbers of baptisms each year varied considerably from about six to fourteen. Marriages were few, perhaps four celebrations, perhaps just one. The number of deaths in the mission also varied. For example in 1841 there were four burials while the following year, 1842, thirteen parishioners died.

The earliest marriage register in the parish’s possession… 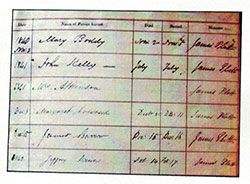 Turning to more material matters, what was the financial position of St. Joseph’s mission during the pastorate of James Platt? We are fortunate in that he left us an imperfect but quite substantial
day-by-day record of his household expenses. The first entry is dated 3 February 1829 when he paid 2/6 for ‘a large clock mending’. As might be expected, many entries record payments for food. Platt buys ‘half a hundred herrings’ in February 1829 and a supply of ‘salt fish’ later that same month.
A half-year’s butcher’s bill comes to £11.23.0d. and there is a note of a purchase of cheese. Perhaps James Platt grew some of his own vegetables. He buys cabbage plants and garden seeds and about the same time obtains a shovel and spade. A certain G. Kipling supplies four loads of manure. Heating and lighting had to be attended to and there are payments for candles and coals. Such ordinary household expenditure is to be expected but one might perhaps raise an eyebrow at the purchase of two gallons of rum from Mr. Williamson in December 1830.

Mission finances during the pastorate of Fr. Platt

Unfortunately James Platt’s accounts do not include a record of the income of the mission. Then as now the regular ongoing income of most missions came from the Sunday offertory collection. The practice in some missions of paying a regular fee for an allocated place in the chapel, (known as bench rents), could be a useful additional source of income. Like many older missions, Bishop Thornton relied heavily on income from funds left by benefactors for the support of their priest and chapel. In the case of St. Joseph’s there were two such endowments, known as the ‘Raventofts and Littlethorpe’ funds, which brought in some £29.0.0d. per annum, then a considerable sum.

Up to the mid-nineteenth century the entire proceeds of this endowment were enjoyed by the Bishop Thornton mission. However in the early 1850s Ripon became a separate mission and the Raventofts and Littlethorpe fund was divided between them. St. Joseph’s portion was much reduced to some £16.0.0d. per year. A return made to the Bishop in 1856 suggests that the only regular income from within the mission was now the Sunday offertory. There appear to have been no bench rents and no other collections. It is not surprising that from the mid 19th century St. Joseph’s began to rely on contributions from a diocesan fund established to assist those missions which were unable to support themselves. The first grant of which we have record from the Beverley Diocesan Fund was made in 1850. Further grants followed including two quite substantial payments, one of £25.0.0d in 1856 and another for the same amount the following year.

The grants from the Diocesan Fund must have been a very welcome addition to the income of St. Joseph’s mission. However even this did not provide sufficient to maintain the mission and its priest. Fortunately a new source of income became available, the ‘Tempest Fund’. This was established by Anna Maria Tempest of Ackworth Grange, near Doncaster and was intended to assist ‘ten of the poorest and most necessitous RC churches and chapels in the Yorkshire District’. That St. Joseph’s was nominated by the Bishop to receive a grant from this fund shows that he himself regarded the mission as one of the poorest in Yorkshire.

A fine brass memorial to James Platt, in the sacristy at St. Joseph’s

The last seven years of his service in Bishop Thornton must have been a trying time for James Platt. The details of how he came to leave St. Joseph’s are uncertain but the first indication we have that all was not well is contained in a letter from the Vicar General, Joseph Render, of York, written in August, 1856. He had received a letter from James Platt who thought that he was sinking fast and expected to die soon.

The Vicar General visited Platt and found him ‘very nervous but in no danger whatever’. We hear nothing further until January, 1858 when we find that the Reverend Ralph Platt, a nephew, is staying at the priest’s house in Bishop Thornton and attempting to settle his uncle’s affairs. James Platt is no longer resident there and clearly the unfortunate missioner had been unable to leave his affairs in good order. His nephew reports considerable outstanding bills to the butcher, the grocer and to other creditors. Ralph Platt hopes these will be made good by the diocese as his uncle had ‘spent his days in poverty labouring for the Yorkshire Brethren’.

What had happened to James Platt? There is no clear answer. Many years later, in 1907, a writer tells us that he died in Bruges on 1 February 1862, but we lack confirmation of this statement.

It is surely sad to think that we have no certain knowledge of the date and place of death of this worthy servant of St. Joseph’s mission and that he should have been laid to rest in some grave unknown to us. He deserved better.