Not much more than three miles from Bishop Thornton, tucked away privately down a mile-long, winding drive, stands one of Yorkshire’s most astonishing and romantic medieval houses: Markenfield – now known as Markenfield Hall, though ‘Hall’ was added quite late in its long life.

It is still fully moated, and is the most complete surviving medium-sized early 14th century house in England. The present house was built in 1310, on the site of an earlier one, and for many centuries was the home of the devoutly Catholic Markenfield family. It was seized by the Crown in 1569 for high treason, for young Sir Thomas Markenfield was the instigator of the Rising of the North in that year – the Catholic rising against Queen Elizabeth that sought to re-establish freedom of religious worship at a time when Protestantism was sweeping the country.

It then dwindled in importance to become a tenanted working farm with absentee landlord, which it remained until 1980 when the Nortons, Lords Grantley, collateral descendants of the Markenfields, returned and began the continuing restoration of house and estate.

At the heart of the house lies its beautiful medieval chapel, which seats just 34. During the Markenfield family occupancy, Mass would have said here daily in the old rite. After 1569 its fate is unknown, though the chapel is recorded in the 1880s as being used as a grain-store for the farm.

All this changed in 2001. In that year the chapel was properly restored and brought back into regular use in thanksgiving for their marriage by Lady Deirdre Grantley, widow of the 7th Lord Grantley, and the writer Ian Curteis. Theirs was the first marriage in the chapel since 21st November 1487, when Anne Markenfield married Christopher Conyers of Sockburn by Archbishop’s certificate, which survives. 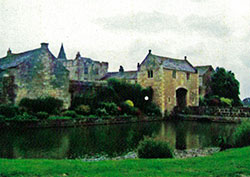 Mass is now said here monthly, and alternates with Anglican services (Book of Common Prayer), as this Catholic chapel extends a warm welcome to the Church of England, a moving act of forgiveness and reconciliation. This sharing of the ancient and prayerful chapel has caught people’s imagination, and excellent congregations result. All are very welcome. People often remark on the extraordinary atmosphere and sense of peace and history the chapel exudes. As one anonymous contributor to the visitors’ book wrote: ‘This place has soul.’