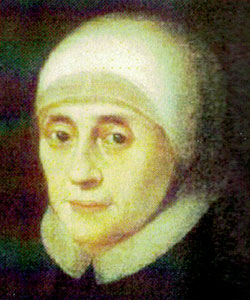 Although Mary Ward spent much of her adult life in Europe, her roots were in Yorkshire, in the parish of Bishop Thornton. Her father owned estates at Mulwith, Newby and Givendale, near Ripon. She was born on 23rd January 1585 at Mulwith, into the England of Elizabeth I, where recusant Catholics were persecuted and sometimes executed as traitors, among them her kinsman, Blessed Francis Ingleby, martyred at York the following year.

At the age of five Mary was sent to the home near Hull of her grandmother, Ursula Wright, who had spent 14 years in gaol for the faith. Mary’s uncles, John and Christopher Wright, would later be executed for their role in the Gunpowder Plot. In 1594 Mary returned to Mulwith and, after a fire which destroyed the house, the family moved to Newby in 1595. Nearby she had cousins in the Mallorys of Studley Royal and the Inglebys of Ripley.

In 1598 the family had to move again. Her father retired to the home of his cousins, the Percys, at Alnwick, Northumberland. Mary was sent to Harewell Hall, between Dacre and Glasshouses, the home of Katherine Ardington, widowed daughter of William Ingilby and Anne Mallory. In 1599, aged 14, she moved yet again, to the home of another noted recusant family, the Babthorpes, near Selby.

In her six years there she received instruction from Jesuit priests and first felt called to the religious life. Initially, she tried to live as a Poor Clare in St Omer, France. However, she discovered that God had called her to apostolic work: the education of girls. In 1609, inspired by St Ignatius, Mary founded a completely new way of life for religious women, and so her Institute, now known as the Congregation of Jesus and the Institute of the Blessed Virgin Mary, was born in St Omer. She founded houses all over Europe, but her novel, unenclosed apostolate encountered much resistance from the Vatican.

In 1631 she was imprisoned by the Inquisition and her Institute suppressed. Returning to her Yorkshire roots, she died near York in 1645 and is buried at Osbaldwick. After her death her companions ensured that her vision would survive and the Bar Convent was founded in 1686. In 1877 the Institute was confirmed by the Church, but it was not until 1909 that Mary Ward received official recognition as its foundress. Today her apostolic work continues throughout the world.