From Holland to Holland

The new missioner at St. Joseph’s, Bishop Thornton, had a sense of humour. He used to say that he came ‘from Holland, by Holland, to Holland’. This was quite true. He was born in Holland, the ship that brought him to England was called ‘The Holland’ and Holland was the name of the priest in charge of the mission to which he was first appointed. He was the Reverend Herman Geurts and later confessed that he would have liked to have gone to Africa or China or to ‘some other wild place’. Instead he came to Yorkshire and served throughout his long life in the Diocese of Beverley. 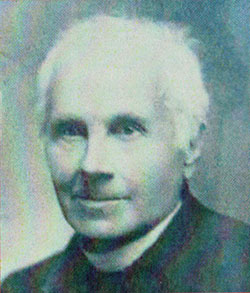 As an assistant priest in St. Marie’s, Sheffield he had distinguished himself by his courageous ministry during an outbreak of smallpox. Now it was early summer of 1875 and he had been away on holiday. On his return he received a letter from Bishop Cornthwaite announcing his appointment as sole pastor of the mission of St. Joseph’s, Bishop Thornton. ‘Being a country congregation’, Cornthwaite warned him, ‘they require a little rousing and I trust that you will give it to them’.

The priest’s house there certainly required attention. From a careful inventory made by Geurts we find that his new home was quite inadequately equipped and contained little that was not old, shabby, worn or in need of replacement. However Fr. Geurts was fortunate in having a private income. He set to and refurnished the entire house at his own expense. He could now begin his ministry with a suitably provided chapel and a house that was isolated but at least comfortably furnished.

The cemetery and the new seminary

His first project was the improvement of the cemetery attached to St. Joseph’s chapel. This had been opened about 1860 but now no doubt required attention. The work was paid for by subscriptions from parishioners and new pathways, boundary walls and ornamental planting were provided. Fr. Geurts was also anxious to support Bishop Cornthwaite’s proposals to build a Diocesan Seminary in Leeds. A Pastoral Letter was to be read on Sunday 18 March 1877 asking for donations to this work. Fr. Geurts asked the Bishop for additional copies to distribute to his congregation. His letter to Cornthwaite would have caused him considerable embarrassment had it become known to his parishioners. ‘People here generally take things very easy’, he writes. ’It takes weeks and months before they can make up their minds’. But the parishioners of St. Joseph’s were not the only ones who doubted the wisdom of the Bishop’s grandiose schemes.

A new altar and new Stations of the Cross 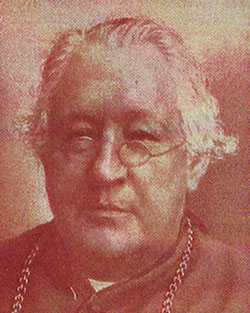 Bishop Cornthwaite’s later years were troubled by continuing infirmity. He died in June 1890 and was succeeded by his Vicar General Bishop William Gordon. The new bishop was very familiar with the chapel in Bishop Thornton. He was brought up in Ripon and when old enough would ride his pony to Mass at St. Joseph’s. His parents were buried in St. Joseph’s cemetery and in 1898 the Bishop donated a new altar to the chapel in their memory. It is an example of the exuberant church gothic of the late Victorian age and the purist might argue that it is quite out of sympathy with the severe Georgian character of the building. Even so it has now been familiar to generations of worshippers and one may be grateful that it was not swept away when the sanctuary was re-ordered.

Seven years after the erection of the new altar the present set of the Stations of the Cross was installed by Fr. Geurts. He obtained these in 1905 from a firm of church furnishers in Bruges and the original bill has survived. The total cost came to £92.8s.0d. On the back of the bill Geurts noted the contributions received from parishioners. He was surely pleased when he received more than sufficient donations to meet the cost of this notable embellishment of the chapel.

Confirmation, conflict and a celebration

The early years of the new century also saw a celebration in St. Joseph’s chapel of the sacrament of Confirmation. In June 1907 Bishop Robert Cowgill came to officiate at the ceremony and the event was reported in the local newspaper. The day opened with Solemn High Mass at 10.30am and in his sermon the Bishop ‘expressed himself delighted with the state of the mission’. The name of Dean Geurts, he said, was synonymous with Bishop Thornton and the Bishop hoped that parishioners would make ‘his work of thirty years among them’ as light as possible. The Confirmation ceremony began at 3.30pm and twenty-three candidates received the sacrament. The service ended, we are told, with Benediction of the Blessed Sacrament. The Bishop’s visit would have involved considerable preparation and the newspaper reporter seems to have been impressed. He concludes, ‘The beautiful weather caused large numbers of people to attend, and it was with regret that another eventful day in Bishop Thornton’s history was brought to a close’. 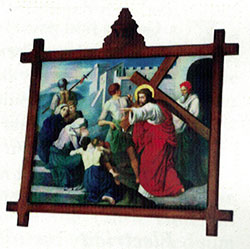 One of the Stations of the Cross at St. Joseph’s

One may imagine Bishop Cowgill’s visit to Bishop Thornton in June 1907 as taking place in the tranquil warmth of an Edwardian summer’s day. Yet perhaps some of those children who were Confirmed that afternoon were caught up in the tragedy of the conflict, the Great War, that broke out seven years later when they were still young adults. In the early summer of 1918 the war continued remorselessly but for just a few hours the parishioners of St. Joseph’s set aside anxiety and fear and met in their parish schoolroom for a celebration. The occasion, on Thursday, 6 June, was the Golden Jubilee of the ordination of their pastor, Dean Herman Geurts. Much well deserved praise was expressed by those taking part but Herman Geurts was quite realistic. As he would be seventy-eight years of age in a few days, he said, he believed that he could not expect to have many more years of life, ‘but what remained would gladly be spent in the service of the Church’.

As it turned out Dean Geurts was mistaken and he continued for another ten years to care for his congregation in this scattered rural parish. However as the new year of 1929 opened Herman Geurts’ time of service at St. Joseph’s was drawing to its close. Perhaps he now felt a growing sense of isolation. So many of his contemporaries had gone to their rest. Who could now share his memories of years long gone? Nonetheless he resolutely continued with his pastoral duties. On Sunday, 9 June he celebrated Mass for his parishioners. The following Tuesday and Wednesday he arose as usual at 7.15am to prepare for morning Mass. Then, on Thursday, 13 June, his long life came to an end. A few days later Bishop Cowgill presided at his Requiem Mass and afterwards his remains were laid to rest in the cemetery he had restored when he came to St. Joseph’s some fifty-four years before.

We are told that the children in St. Joseph’s school were greatly distressed when they heard of the death of Fr. Geurts. He was someone who had been a familiar part of their lives. His remains now lie close to the school he knew so well. The cries and the laughter of children at play are still heard as they were in his day. Herman Geurts would surely be well content to rest in so familiar a spot.