It was a day in early June, that moment when the promises of spring begin to blossom into the full ripeness of summer. The year was 1481 and on the previous Sunday, the parishioners of the Minster Church of St. Peter and St. Wilfred in Ripon had celebrated the feast of Pentecost. Now, a few days later, a group of clergy and laymen gathered to perform an important ritual. John Walworth of Raventofts Hall, Bishop Thornton, was among them.

They met to go in procession around the boundaries of their parish. One hopes that those taking part were of sound constitution as an arduous journey lay in front of them. Their journey is of interest to the modern parishioner of St. Joseph’s, Bishop Thornton, in that it recalls the origins of the present community. It is a community whose story is linked to the Walworth family and to Raventofts Hall. It is also a story which begins in the late medieval age.

John Walworth and his companions all belonged to the great parish based on the Collegiate Church of St. Peter and St. Wilfrid, which later became Ripon Cathedral. This ancient parish covered roughly the area of the present Catholic parishes of Pateley Bridge, Bishop Thornton and Ripon. Until the 1850s the mission based on St. Joseph’s, Bishop Thornton, was responsible for the same extensive district. One may see a kind of geographical continuity between the medieval and more modern Catholic parish.

The out-chapels of the Minster church

In view of the widespread nature of the Minster parish it is not surprising that, over the years, out-chapels should have been established for the convenience of the local people. Some were domestic chapels in the houses of the more wealthy, as at Markenfield Hall. Others were quite separate buildings. The first chapel built in Bishop Thornton was one such, although the date of its building is uncertain.

A note has survived, possibly written in the 1460s, which clearly refers to Mass being celebrated both in a chapel at Raventofts Hall and in ‘Thornton Chapel’. We know that, at that period, the chaplain at Raventofts Hall was a certain John Kendale and in 1467 he is authorised by the Minster authorities, as the mother church, to carry out, in the Thornton chapel, the ceremony of churching (blessing after childbirth) of Alice, wife of John Wheelhouse of ‘Thorntonwoode’. However there is also a document, dated 1440 which refers to an alms chest ‘in Thornton Chapel’. It must then have been built before the 1460s and perhaps the most we can say is that the new chapel in Bishop Thornton was erected some time in the first half of the 15th century.

Religious life in the Minster parish in the late middle ages 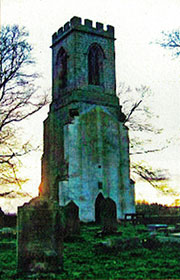 The tower, all that remains of the 1825 church

Although they now had their own ‘chapel of ease’, the people who lived in Bishop Thornton and the nearby villages still belonged to the parish of Ripon Minster and religious life was based on the mother church. All were expected to attend Mass there on major occasions such as Christmas, Easter and Pentecost. They would normally go to the Minster to be married and to have their children baptised. Their funeral rites would be carried out in the mother church and they would be laid to rest in the Minster cemetery.

Let us imagine a parishioner attending Mass in the new St. Joseph’s church in the early 1800s. What would he feel if transported back to the Minster church of the late medieval age? He was certainly well accustomed to the Latin liturgy he would find there. Like his medieval predecessors he would greet the Lord with a prayer of adoration as the priest lifted the consecrated Host above his head at the elevation of the Mass. The annual round of feasts and seasons would follow a familiar pattern. When he came, for example, to the services of Holy Week, he would feel he was engaged in devotions which were carried out with greater splendour than he had ever seen, but which in essence were perfectly well known to him. He could join in the procession on Palm Sunday, venerate the Cross on Good Friday and receive his Easter Communion alongside his medieval predecessors, united with them in the same faith and worship. He could feel at one with them in so many ways.

The end of the first chapel in Bishop Thornton

The original chapel in Bishop Thornton was rebuilt in 1825 and the present tower, all that now remains, is said to date from the same time. However the altar table on which John Kendale celebrated Mass in the 15th century has an honoured place in St. Joseph’s church in Bishop Thornton. It is also thought that most of the stone used in 1888 to build the nearby church of St. John was taken from the rebuild of the original chapel in 1825. Perhaps therefore in the walls of St. John’s church there is still some remnant of the fabric of the Chapel in which later medieval parishioners attended Mass and John Kendale officiated. It would be pleasant to think so.