Out of the shadows

The emergence of Raventofts Hall

The eighteenth century was not, on the whole a happy time for Catholics in England. The barbarous executions on the Knavesmire had ceased but severe penal laws remained in force. They might not be strictly applied but nonetheless they provided sanctions that could be invoked should Catholics exceed the reasonable bounds of toleration. Yet the Catholic recusants of the old Minster parish of Ripon clung on to their faith. An enquiry of 1706 lists a total of 215 Catholics in the area, including fifteen in Ripon and seventy in Bishop Thornton. Catholics were also found in Pateley Bridge, Bishop Monkton, Sawley, Aldfield, Ingarthorpe and Markington.

How were the spiritual needs of these Catholic recusants provided for? At the national level Catholic leadership was now better organised. In 1688 Rome had established four areas known as ‘Vicariates Apostolic’, each under the care of a bishop, the ‘Vicar Apostolic’. The communities cared for by the priests in these Vicariates were missions rather than parishes and their pastors had the status of ‘Missionaries Apostolic’.

During the first half of the 18th century the mission based on Raventofts Hall emerged as the centre for the care of Catholics living in the old Minster parish. The Hall had come into the possession of a branch of the Ingleby family and although they later conformed to the Protestant religion, they continued to give shelter to the priests in charge of the mission. The first missioners we know of at Raventofts were Robert Jefferson and John Dunn who were there in 1735. These were followed by James Skelton and Henry Maire, both of whom arrived at the Hall in 1741 and seem to have served the mission together. They were rather unfortunate in that, with a number of other priests, they were gaoled for a while in York Castle on suspicion of involvement in the Jacobite rising of 1745. However their incarceration did not last long and they were soon able to return to their pastoral duties. James Skelton died at Raventofts in 1760 and not long afterwards Henry Maire moved on to a new appointment.

The arrival of Richard Talbot

On 23 March 1764 the Reverend Richard Talbot arrived at Raventofts to take charge of the mission. Then a young man of twenty-six years of age he would remain as its pastor until his death in 1823. He was born in 1738 near Leyland in Lancashire and studied for the priesthood at the English College in Rome. After ordination in 1762 he returned to England and, for a short while, served in a gentry household in Cumberland before taking up his appointment at Raventofts.

In 1767, some three years after Talbot arrived at Raventofts a further national census of Catholics was ordered. The returns from the York Diocese are rather enigmatic in that they give only initials instead of full names. However it is quite clear that within the old parish of Ripon Minster the strength of the Catholic community was located in Bishop Thornton. The first to appear on the list there is ‘RT priest’ and ‘JR his servant’. This is clearly Richard Talbot and ‘JR’ his housekeeper whose name, alas, we shall probably never know. A total of sixty-four other adults are listed in the returns as living in Bishop Thornton together with nineteen boys and twenty-one girls under the age of eighteen years. Most of the males in the returns are farmers but we also find a weaver, tailor, shoemaker, labourer and joiner. There are rather fewer Catholics in Ripon, a total of fifty-two adults with forty-two young people.

The priest’s house and new chapel

Of all the priests who served at Raventofts or Bishop Thornton, Richard Talbot undoubtedly had the most profound effect on the future of the mission and parish. In May, 1767, through the agency of Francis Trappes of Nidd Hall, he bought from Thomas Chapman of Bishop Thornton, ‘all that piece of meadow ground of 1 ½ acres called Lawson Garth’, the site of the present presbytery. Having secured a site, Talbot seems to have begun work on his house immediately. We find that in 1767 Bishop Francis Petre, then Vicar Apostolic of the Northern District, gave a donation of five guineas to ‘Mr. Talbot towards the building of his house’. It is not clear whether the house was built entirely from new or whether it made use of materials from an older structure. Some roof beams certainly appear to be of an earlier date.

The exterior of the house looks quite unremarkable, a typical yeoman’s home. However it contained a large upper storey, not evident from the outside. This also was quite normal in that such upper floors in farmers’ houses were often used for storage. But was this space intended to serve as a chapel? The penal laws still prohibited Catholics from building public places of worship, so the provision of an upper floor as an inconspicuous and semi-hidden place for the celebration of Mass is quite plausible. There is no contemporary evidence on the matter but we may reasonably judge it most probable that for some forty years the Catholics of St. Joseph’s mission made their way up a rather narrow staircase to attend Mass in the upper room of their pastor’s house.

The need for such concealment was largely removed in 1791 when an Act was passed allowing Catholics to build their own places of worship. Perhaps this encouraged Richard Talbot to consider erecting a new chapel to replace the upper room which had served the community well but which was undoubtedly inconvenient and barely accessible to the elderly or infirm. Since moving to Bishop Thornton he had bought further pieces of land and now had ample room for a purpose-built chapel as an extension of his house. No contemporary documents have survived regarding this project apart from a mention in a memoir written by a Fr. John Laurenson. He clearly knew Richard Talbot and speaks of him going to Raventofts, ‘near where he has built a new house and chapel at Kay Hall alias Lawson Garth’. Most of Laurenson’s memoir seems to have been written in 1808 although he began writing in 1806. 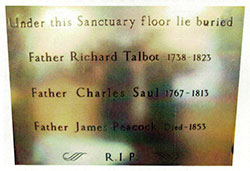 Reflecting the customs of the times, priests serving St. Joseph’s were buried under the sanctuary floor

When the new chapel opened Richard Talbot was about seventy years on age and had served the local Catholic community for some forty-four years. Not long afterwards he was joined in Bishop Thornton by the Reverend Charles Saul, a much younger priest then forty-three years of age. He already had an interesting history. At the outbreak of the French Revolution Charles Saul was a student at the English College in Douai in Northern France. The revolutionaries seized the college and imprisoned the staff and students. Along with a number of other enterprising young men, Saul escaped and made his way to England where he completed his studies for the priesthood and was ordained in December 1794.

It would seem that Bishop William Gibson, then Vicar Apostolic of the Northern District, intended Saul to replace Richard Talbot as missioner of Bishop Thornton. He was under the impression that Talbot was too old and too infirm to continue there. It is hardly surprising to find Talbot reacting rather sharply. In a letter of 5 January 1811 to the Bishop’s Vicar General, he writes, ‘I would have you to understand that I shall not give up to Mr. Saul or to any body else as long as I am able to perform my duty’. Whoever had told the Bishop that this health was bad, ‘they have told him very untruly’. Charles Saul remained in Bishop Thornton, but died only three years later in 1813 and was buried under the floor of the sanctuary in the new chapel.

The now-elderly Richard Talbot whom Charles Saul had been sent to replace, continued to care for St. Joseph’s mission for a further ten years. Finally, on 1 August 1823, at eighty five years of age, he died. It was entirely fitting that he too should have been laid to rest in the chapel he had done so much to provide. If anyone is to be regarded as the founder of the present St. Joseph’s parish, it is surely Richard Talbot. He served the Catholic community there for most of his adult life. He was instrumental in obtaining a site in Bishop Thornton on which he first of all built a Mass house and then a new chapel. His work calls out to be acknowledged and Richard Talbot deserves to be remembered.