Fr. Geurts had presided over the parish of St. Joseph’s, Bishop Thornton for fifty-four years. Their new pastor, the Reverend Ernest Corner Reynard, was a person of a very different background. Born in 1881 he studied theology in Fribourg and completed his training in the Diocesan Seminary in Leeds. He was what we know as a ‘late vocation’ and was already forty-four years of age when he was ordained in 1925. His length of service in St. Joseph’s would not equal that of this predecessor, nonetheless he would remain there of some thirty-four years.

When Fr. Reynard moved into St. Joseph’s in 1929 he found that, after dark, he was still obliged to use candles and oil lamps to light the presbytery, church and school. Electricity had not yet been installed. Not surprisingly he decided this was a deficiency to be remedied. The first we learn of his intentions is on Palm Sunday, 20 March 1932 when he announces that the Easter offerings that year would be ‘for installing Electric light in school, church and presbytery, not less than £20’. The collection was generous, but at £5.4s.3d. was a long way short of the sum required. To raise the money, there would be, he told the parishioners, a Special Collection every Sunday from then on. He was good as his word and collections continued for over four months until, on Sunday, 7 August, he could announce that the full cost of £25.0.0d. had been raised. We do not know when the installation of electricity took place but the congregation, the school-children and the teachers must surely have welcomed the benefits this improvement brought.

In 1939 the congregation of St. Joseph’s, together with the rest of the country, entered the dark period of the Second World War. On Sunday 3 September Fr. Reynard appealed for blood donors to contact the local W.V.S. the Women’s Voluntary Service. There was no Midnight Mass that Christmas and not long afterwards Fr. Reynard began a weekly Mass for the ‘unremembered dead in war’. The sadness of war touched St. Joseph’s parish in 1941. On Sunday, July 6, Fr. Reynard announced the death of Peter Wilberforce of the Markington family. He was serving with the Royal Tank Regiment and had been killed on active duty in Libya. The family later presented a window to the church in his memory. 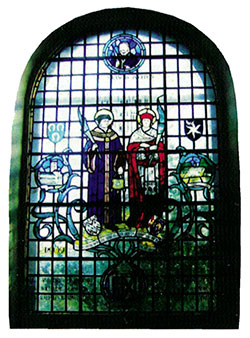 After years of trauma of war and the deprivations of the austerity period which followed the moment came at last when St. Joseph’s parishioners could celebrate an important occasion. On 22 February, 1959 Fr. Reynard drew the attention of his congregation to the design for a stained glass window, displayed in the porch. This was to be a memorial window to commemorate the 150th anniversary of the building of their church. The window depicted St. John Fisher and St. Thomas More. It would cost £275.0s.0d. and considerable effort was required of this small parish to raise the sum.

The main fundraising event would be a whist drive and dance to be held in the Cairn Hotel in Harrogate the following month. The required sum was raised and the celebrations took place on Friday, 1 May, the feast of St. Joseph the Worker. The Bishop of Leeds, George Patrick Dwyer, blessed the new window and celebrated Mass, attended by parishioners, local clergy and the schoolchildren. The window is an elegant and truly worthy memorial of so important an occasion.

Fr. Reynard was already seventy-eight years of age when these celebrations took place. After a few more years in Bishop Thornton he retired and in 1970, at the age of eighty-two years, he died in St. Joseph’s Retirement Home in Horsforth. The parish burials register records that his funeral took place at St. Joseph’s church and he was laid to rest in the graveyard.

The new parish priest of St. Joseph’s was again a person of a very different background to the previous pastor. Fr. Patrick Tansey was born in Co. Leitrim, Ireland in 1921. He studied at University College, Dublin, and completed his training at All Hallows seminary. Ordained in 1946 he was well experienced in pastoral work when appointed to Bishop Thornton at the age of forty-two years.

One of Fr. Tansey’s Sunday notice books has survived. This gives an interesting insight into the ordinary life of the parish. We find, for example, that in May, 1967, Fr. Reynard returned to Bishop Thornton to take part in the dedication of a window he had presented to the parish in memory of the priests who had worked in that area. We also see how considerable of Mass which came into effect during Fr. Tansey’s pastorate. 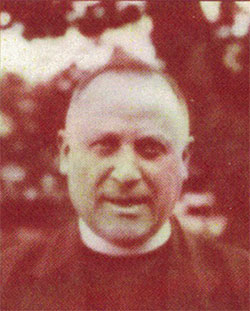 The financial position of the parish was clearly an ongoing concern. This was not a new problem. We noted how, at least from the early 1850s, the parish had found difficulty in providing for its own needs. Again and again Fr. Tansey’s Sunday notice book reflects anxiety concerning finance. The situation became even more serious when, in 1979 and 1980 it was discovered that the church and house needed extensive repairs. The roof timbers of the church and the ceiling joists were badly affected by death watch beetle. The floors of the sacristy and sanctuary were also infested. The presbytery too required attention to ensure its stability.

The parish had also to consider how to re-order the altar and sanctuary area. Understandably the general desire was to retain the existing altar as far as possible. A new wooden floor was laid in the sanctuary and a new altar constructed to match the existing reredos. The general appearance of the sanctuary area was thus preserved. The cost of the repair and re-ordering project was met partly by a government grant, partly by the sale of parish property and partly by a grant from diocesan funds. 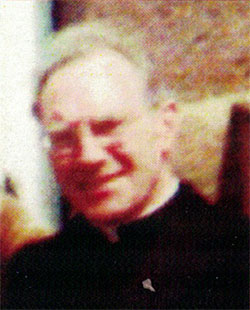 The completion of these extensive works must have come as a great relief both to Fr. Tansey and to the parishioners. Unfortunately he did not live to celebrate Mass for long in their newly restored church. He died, after a short illness, on 11 January 1981. He was fifty-nine years of age. A few days afterwards his funeral took place, presided over by Bishop William Gordon Wheeler and attended by parishioners and some forty priests. Like his two predecessors, Fr. Geurts and Fr. Reynard, he was then laid to rest in the parish cemetery. May he be well remembered in the prayers of those who now worship in the church he did much to restore and to beautify. 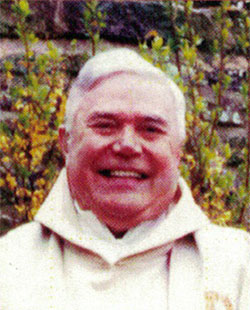 The pastorate of Fr. Patrick Tansey was followed by that of Fr. Francis Pepper, (1981 – 1997), that of the writer of history, (1997 – 2003) and that of the present parish priest, Fr. Patrick Waldron. However the re-ordering of the sanctuary area in the time of Fr. Tansey marks the last major change to be made to the character of St. Joseph’s Church. That seems therefore and appropriate moment at which to conclude this present account of the development of our community. We pray that its story will continue long into the future and, in years to come, may some other writer, perhaps as yet unborn, continue this chronicle of a faithful and a constant people.