The present school building was opened in 1886 by its donor, Lady Clara Howard, to replace the existing parish school. The school log of 22nd November noted: ‘An undercurrent of excitement among pupils – new school to be opened’.

An elementary school had been attached to the mission of St. Joseph’s for some years, an old plan showing a ‘school’ in a corner of the presbytery garden. This building probably later became two cottages, now replaced by two houses. No regular school is evident until 1855 when Fr. James Platt is said to have opened one ‘in a room attached to a farmhouse’ and later to have ‘transformed a large stable into a schoolroom by adding an upper storey thereto’.

Few school records pre-date 1886, although Fr. William Arnold’s Sunday notice book of 1st January 1864 stated that the school would re-open the next day from 9am to noon and 1.30pm to 4pm with a charge of £2.3s.4d. A Catholic journal observed in 1889 that, ‘from 1858 to 1870 the school was carried on under great difficulties’. A diocesan report of 1870-71 listed St. Joseph’s under ‘Missions with schoolrooms but no teacher’. There were 18 children attending and the report commented: ‘Mission poor and unable to support school”.

The 1870 Education Act seems to have had a good effect. Inspections in 1880-81 noted a considerable rise in numbers, with 127 children on roll and 68 attending at the time of the inspection. Attendance had become compulsory for children between five and 13, but most helped in the rural community and lessons were not always the main priority. A few years later the school log of October 4th 1886 stated: ‘Anne Benton, trained certified teacher (Liverpool), commenced duties in a temporary room. New school near completion’.

A commemorative plaque in the school records that the school was the gift of Lady Clara Howard, wife of Francis, second Baron Howard of Glossop, Lady Clara’s father was John Greenwood of Swarcliffe Hall, Birstwith.

The log for 24th November 1886 reads: ‘Our beautiful, well-furnished school opened by Lord and Lady Howard, the foundress of the school. Mistress received a letter of instruction from Lady Howard on matters pertaining to the cleanliness and order of school. Promises given to carry out the instruction.’ There were 27 children on the roll – exactly the same as today. Now as then the school flourishes at the heart of the St. Joseph’s community, giving children cherished memories of the start of their education. 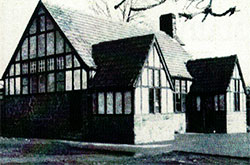 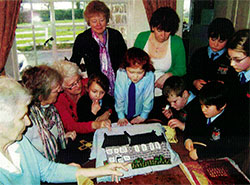 St. Joseph’s pupils working with women of the parish on a banner marking the bi-centenary 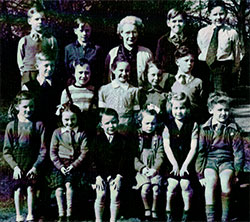 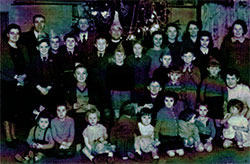